Mikey’s Story:  No Longer a Life Sentence of PANDAS and ADHD

Michael came into the world by storm.  The cord was wrapped around his neck and the nurses literally pushed him out.  He literally flew out and the doc caught him.  He placed him on my tummy:  blue and quiet.  I said, “He is blue and quiet.”  The doc said, “Give him a minute he will be fine.”  A moment later he began to cry and his color returned to him.   My sweet boy had entered the world.

When we got home my new baby did not sleep for an amount of time.  After a week I was exhausted and took him to the chiro.  The chiro we saw said, “Wow, there is something up.  You will need to go see Dr. Spicer, a pediatric specialist at the Chiro college.”  So, off we went.  Through her we found out Mikey was having issues with gluten.  So, I quit eating gluten.  From that point on he slept and became the perfect babay.  Mikey was a perfect infant, a little reflux, but adujstements took care of that instantly!

Through out his early years he was prone to strep throat.  But, we just did antibiotics and he would be fine.  And being into natural stuff we always rebuilt his gut after the anitbiotics.  All seemed fine, until second grade.  I had decided to homeschool him that year.  He was having a hard time sitting in class in first grade and rushed through everything.  He had wanted to be homeschooled because everyone else had been in the past.  So, we decided this would be the year.  As it turned out between first and second grade his behavior became more and more irradiact, paying attention was next to impossible, he was unable to read, unable to write, had major fears creep in, sesory processing became a huge factor, and forgot all his math problems.

I took him to a natropath Dr. Barret in Minneapolis.  We did some stuff for ADHD that I knew we were dealing with and I had already done alot prior to this appointment to address the ADHD issue but nothing helped.  He was already on a GF diet and eating very healthy.  Through a stool test she discovered his gut was filled with STREP!  FIVE strains, I did not even know there were FIVE strains fo strep!  A condition called PANDAS.

Here is a description of common PANDAS sympotms (from Molecular Labs):

Physical Symptoms of PANS and/or PANDAS: 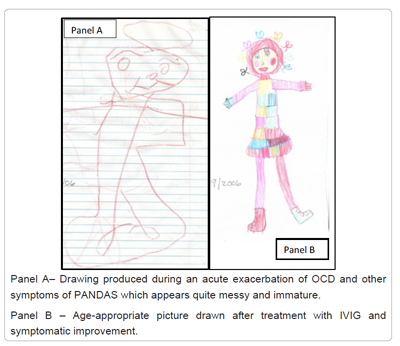 Behavioral Symptoms of PANS and/or PANDAS:

All the bold ones are what Michael had developled suddenly!  That is the key with PANDAS it is sudden!  So, we worked with Dr. Barret to kill the strep.  We did herbs, supplment, tinksures, everything she had in her back pocket.  And the strep continually came back.  She suggested going to a medical doctor and try steroids paired with penicillin.  So, we partnered with Dr. Bob Zajac, our pediatrician and did steroids paired with antibiotics.  (2 rounds one stronger than the other), it still grew back.  So, after battling a few years literally to kill this stuff.  We literally began to pray over him that the stuff would die (we had prayed along the way, but this became very specific- not sure why we didn’t think of this sooner, lol) and after a kill we over innuclated his gut!  We then did testing and it was gone!  A few years of hard work, diet restrictions, and it was finished!

The road was often defeating, tiring, and overwhelming.  Seeing your child struggle emmensly in school and everywhere they go because they are unable to regulate themselves, are overwhelmed by stimulus, accidently got gluten (which is like a match to fire on gasoline when you have PANDAS).  But we hung in and did not give up!  Jer 29:11 kept me going on this one with Mikey.  “For I know the plans I have for you declares the LORD, plans to prosper you and not to harm you, plans to give you hope and a future.”  That is exactly what He has done for my Mikey and what He will do your child too!

What works for each person is different because everyones body is different.  So, if your child is struggling with ADHD or PANDAS please know there is an answer.  You just need to pray for wisdom and the correct people to walk with you on the journey!  God is faithful and He will lead, open doors, and show you the way to healing!  He has done it over and over and over for us and He will do it for you too!

Currently PANDAS is no longer a battle for us!  We keep Mikey’s gut well populated with good bugs to keep those bad ones at bay!  We also use *VIVI and *CX3  (along with *MBC- powerful probiotic) from systemic if he gets a sore throat to kill the strep right away.  Sometimes the PANDAS does seem to raise its head after a bout of strep throat, but it is so obvious and we keep him on the *VIVI and *CX3 until his behavior returns to normal again!  We are still in the process of rebuilding his reading and writing through tutoring.  His attention is much better but we also support that through chiropractic, supplementation, & diet.

There is freedom from these things the world tells “Nothing can be done about!”  We are a living testimony to it.  God is bigger and knows the path for us to take!

*VIVI and CX3 are suppelements from Systemic Formulas

You’re The Mama! You Were Created for Your Kids!

There are no upcoming events.

"I just wanted to say how much Kiara and I enjoyed the Kids in the Kitchen class last week @ the co-op.

Kiara was so proud of herself dicing the red peppers.

She has asked to make these classes a regular part of her schedule when they occur.

I’m looking forward to the Mom’s Nutrition Network get- togethers, too."

How to use Thieves

■How To Use Essential Oils